Way of the Passive Fist

Survive on a world gone mad by fighting defensively and wearing down your enemies. Take on the role of the mysterious Wanderer and parry, dash & dodge your way to victory against desert raiders, mutant monstrosities & fanatical sun worshippers.

By standing firm and absorbing the energy from incoming attacks, The Wanderer can unleash their mechanical arm to deliver supersonic strikes or grab any foe and slam them to the ground with ease. 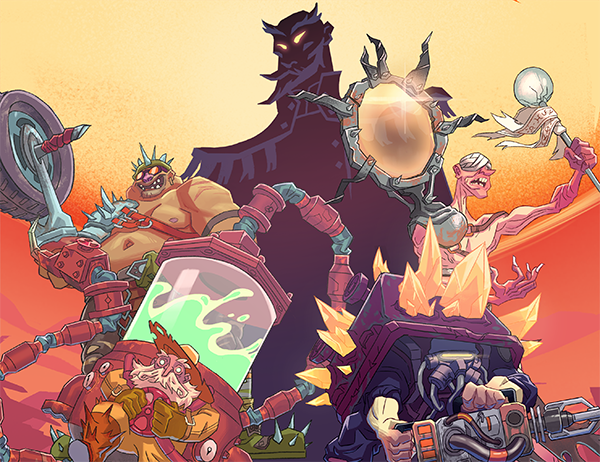 Face off against larger than life villains led by an evil mastermind!

Test your mettle against Breen, the leader of the desert raiders. He wields a mechanical arm that he uses to cruise though the dunes. Stand tall in the face of Tanner, the high priest of the sun worshippers. He bears the burden of a giant lens he uses to disintegrate non-believers. Pluck the demented Dr. Thornborne who practices a particularly lethal branch of botany. Dig deep in search of Dredge, the foreman of a mysterious mining operation that searches for a source of sunlight underground. Each boss has their own crew of lackeys to stand in your way, so be ready!

Take on enemies of all shapes and sizes such as the devout sun worshippers of the desert, mutant plant creatures and tireless robotic sentries. Each enemy has their own attack patterns and rhythm that you'll have to master in order to wear down and defeat them. Deflect the blows of human opponents to tire them out, but watch for the inhuman reflexes and quick strikes from the mutants! Robots don't get tired so you'll need to save your energy reserves for just the right moment to strike back.

Changing up your moment to moment strategies is at the heart of Way of the Passive Fist's combat.

Travel through 10 unique environments each with its own hazards and challenges from blinding sandstorms to maniacal machinations! Endure in the face of your enemies and uncover a sinister plot that threatens all life as we know it.