Space Geekz - The Crunchy Flakes Conspiracy is a classic 1st Person Point & Click Adventure, resembling the good old days where crazy games like Normality or Myst kept us awake playing all night long. Dive into a weird conspiracy, full of stock trading canibals, radioactive crunchy flakes, talking broccoli and many more crazy stuff in awesome 256 Colors (although it might look different in the Video) and Pixelated Full-HD handmade renderings.

Space Geekz is a Indie-Game and it's primarily made for all those Point & Click Adventure Fans out there,
who seek for new puzzle fodder to solve and who have a sense of humor that is not limited by the mainstream of many other modern Adventure titles. (You will be suprised how many things you can do with a 4 Month old pancake in Space Geekz) :-D 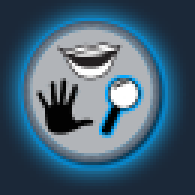 The game is about 80% finished. The estimated release date is Mid 2017.

The Game was successfully funded on Kickstarter last year:
https://www.kickstarter.com/projects/2145295147/space-geekz-die-knusperflockenverschworung

Story:
Till and Adrian are in their mid 20s and working at the Space Geekz Corporation, delivering game consoles and arcade machines throughout the whole galaxy in their old rotten space freighter.
But one day, in the endless space of the galaxy, something went terrebly wrong: Adrian wakes up with a big bump on his head. Till is gone and the freighter is grounded on an abandoned planet.

But what looks like a normal work accident at first, becomes a conspiracy: This is the story about stock trading cannibals, radiactive crunchy flakes, tasteless videogame homage and lots of point & click action from the good old 90s. Of course in pixelated Fake-VGA with amazing 256 colors!

FAQ (based on the comments):

What that meme-face on the wall?
Since the game is set in the future, I found the idea that we hang up "trash art" like that up on our walls in 40 or 50 years. quite funny.

256 Colors? I don't get it, what's so important about this?
If you don't get it, you might be a younger gamer. Most games back in the early 90s were only offering 16 colors, the better ones 256 colors. To get the feeling of a true color picture, a dithering filter is used. Space Geekz uses that feature too, although due video compression, it is hardly visible in the clip above.

Why did Kickstarter backers from outside Germany the game shipped on microSD and not as digital download?
Thanks to a bad new VAT regulation by the EU, selling digital goods outside your homecountry became a expensive and time consuming task. Hard to solve for an indie developer. To solve that: Backers from other countries get some kind of a physical copy of the game (and a free microSD yay). Once the game is greenlit on Steam, the game will be available here for digital download for everyone of course.

Feel free to comment. You are welcome to tell what you like and what you dislike on the game.
Stay friendly. Rude language, spam, swearing or any kind of racistic comments will be deleted.